Gwalior Fort is one of the most famous forts in India. This fort is an 8th century hill fort located in Gwalior in Madhya Pradesh state of India. It is known for its glorious past and stands tall atop a hill as marvel of medieval architecture in India. The famous forts passed into hands of many rulers and dynasties that ruled over the region over different periods of time. Spread over an area of 3 square kilometres (1.2 sq mi), the fort comprises a defensive structure and two main palaces namely Gurjari Mahal and Man Mandir. Gwalior fort is built on an outcrop of Vindhyan sandstone on a rocky, solitary, thin and long steep hill called Gopachal. Gwalior range contains rock formations of ochre colored sandstone covered with basalt. The rock formations of hill fort contain horizontal strata of 342 feet (104 m) at its highest point (length 1.5 miles (2.4 km) and average width 1,000 yards (910 m)). Its stratum forms almost perpendicular precipice. Swarnrekha, a small river, also flows close to the palace. 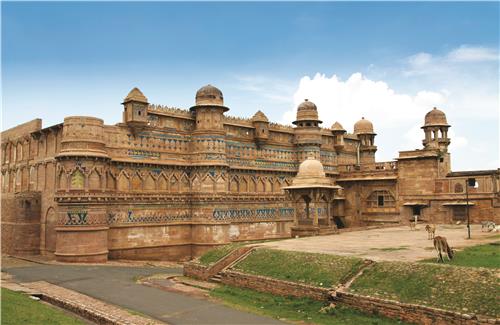 History of Gwalior fort almost dates back to 525 AD (5th century). The earliest record of the fort is mentioned in an inscription in the temple of the Hun Emperor, Mihirakula (510 AD). Located near the fort is an 875 AD Chaturbhuj temple associated with Teli ka Mandir. Several rulers had control over the Gwalior Fort from time to time. Thus, this fort had witnessed several wars, victories and defeats of the emperors and dynasties of that time.The Pal dynasty of Kachawaha once ruled over the region. The dynasty gave 86 kings who ruled for 989 years. Pal dynasty began with Budha Pal and concluded with Suraj Pal. After Pal dynasty, Gurjara-Pratihara dynasty took control over Gwalior Fort. Pramal Dev, Salam Dev, Bikram Dev, Ratan Dev, Shobhang Dev, Narsinh Dev and Pramal Dev were famous rulers of the dynasty.

The advent of medieval period began with unsuccessful attack of Mahmud of Ghazni in 1023 AD. Later, in 1196 AD, Qutubuddin Aibak - the first Turkic sultan of Delhi captured the fort after a long siege and ruled till 1211 AD. After him Iltumish, another Turkic sultan of Delhi ruled over the region. The fort saw attack of Temurlane under control of Narasingh Rao, a Jaina chieftain who controlled the fort. Tomar Rulers start knocking the doors of the fort soon and took control over Gwalior fort when Pramal Dev captured the fort from a Muslim ruler. Tomar dynasty (1398 to 1518) ruled the fort until Vikramaditya was defeated by Ibrahim Lodhi after whose death control passed to the Mughal emperor. Thus, Gwalior Fort came under rule of the famous Mughal Emperor, Akbar, who made it a prison for political prisoners. During Mughal control over the fort, Man Mandir Palace of Gwalior fort witnessed several executions including Akbar's cousin, Kamran and Aurangzeb's brother, Murad and nephews Suleman and Sepher Shikoh. Over the time, Rana Jat dynasty also captured Gwalior fort when the Jats of Gohad occupied the fort on three different occasions between 1740 and 1783. Maharaja Bhim Singh Rana of Jat dynasty controlled the fort from 1740 to 1756 followed by Maharaja Chhatra Singh Rana twice, during 1761-1767 and 1780-1783 respectively.

The most famous Scindia clan of Maratha Empire stationed a garrison at the Gwalior fort in 1779, but it was taken by the East India Company. Later, Marathas under leadership of Mahadji Sinde recovered the fort in 1784. And from then frequent changes took place in the fort and control passed between the Scindias and the British during 1808-1844 occasionally. In January 1844, the fort was finally occupied by the Marathas as protectorate of the British government after the battle of Maharajpur. Gwalior fort has also witnessed as well as been major part during rebellion of 1857 in India. On 1 June 1858, Rani Lakshmi Bai led a rebellion against British East India Company but The Central India Field Force, under General Hugh Rose, besieged the fort and Rani Laxmi Bai died on 18 June 1858.

Gwalior fort is one of the most visited and popular forts in India. Thus, it attracts a number of tourists and visitors from far and wide. The fort and its premises are well maintained to keep it in good condition. The fort houses various historical monuments including palaces, ancient temples and water tanks. It contains a number of water tanks or reservoirs that could provide water to a 15,000 strong garrison, the number of troops required to secure the fort. There are total eleven temples, dedicated to Gautama Buddha and the tirthankaras of Jainism, present in the fort complex. Man Mandir and Gajari Mahal are two main palaces located in Gwalior Fort. Besides, there are few other palaces viz. Jahangir Mahal, Karan Mahal and Shah Jahan Mahal also present in the premises of the fort. Gwalior Fort covers an area of 3 sq km (1.2 sq mi) with an average height of 35 feet (11 m). Built around the edge of the Gopachal hill, its rampart is connected by six bastions or towers. As the fort is built on the undulated ground of rock formations, it has an irregular appearance. There are 21 temples having rock cut intricately carved tirthankaras located on the southern side of the fort. One of these rock carvings is of Parsva, the 23rd local saint and is about 40 feet (12 m) high. The fort has two gates, one on the northeast side with a long access ramp and the other on its southwest side. The main entrance of this fort is the ornate Elephant gate, also known as Hathi Pul while other one is named as Badalgarh Gate. Some of the major monuments built in the fort complex are mentioned below.

Man Mandir Palace is one of the main two palaces located in Gwalior fort. The Man Mandir Palace or Citadel is located at the northeast end of the fort. It was built by the King of Tomar Dynasty, Maharaja Man Singh in the 14th century and was refurbished in 1648. Man Mandir is a big palace with spectacular architecture. Although interior of the palace is mostly empty, it has beautifully designed tiles on the outer side. Beautiful art work is done on its front and some of the interior walls. This palace also has attractive stone walls with beautiful stone carvings. These stone walls are located in vast chambers of the palace. The palace also houses a circular prison and Jauhar pond, the place where Rajput women committed sati.

Gujari Mahal is another beautiful palace in the fort of Gwalior. It was built by Raja Man Singh for his beloved wife Mrignayani. As the palace contains several important artifacts and items, it has been converted into an archaeological museum now. Gujari Mahal Museum houses a number of rare artifacts including various Hindu and Jain sculptures which date back to the 1st and 2nd centuries BC, miniature statue of the Salabhanjika, beautiful terracotta items and the replicas of frescoes found in the Bagh Caves.

The Hathi Pol Gate (Hathiya Paur), also known as Elephant Gate is located on the southeast of the fort. Being last gate of the series of seven gates, Hathi pul leads to the Man Mandir Palace. It has been named after a life-sized statue of an elephant (hathi) that once adorned the gate and thus it became famous as hathi pul. Elephant gate is built in stone, in shape of cylindrical towers crowned with cupola domes and linked by the carved parapets.

One of the major attractions in Gwalior Fort, ‘Teli-Ka Mandir’ (the oilman’s temple or oil pressers' temple) is the oldest part of the fort. The temple is basically a Brahmanical sanctuary, built in the 8th (or perhaps the 11th century). Teli ka Mandir was refurbished between 1881 and 1883. The temple was originally dedicated to the Lord Vishnu, but later it was converted to the Shiva temple. A unique blend of ancient north and south Indian architectural styles is visible in the architecture of this temple as there is a shrine within the rectangular structure with no pillared pavilions (or mandapas) and a Buddhist barrel-vaulted roof built on a Hindu temple. Buddhist architectural elements can be visibly seen in the Chitya type hall as well as torana decorations at the entrance of the temple.

It has a masonry tower built in the nagari architectural style and having 25 metres (82 ft) high barrel vaulted roof. The entrance door of mandir is adorned with a torana or archway having sculpted images of river goddesses, a Garuda, romantic couples and foliation decoration. Diamond and lotus designs are also found on the horizontal band at the top of the arch and such kind of designing in this temple indicates an influence of the Buddhist period. A small grouping of discs is also present above the door which represents the finial (damalaka) of an Indo-Aryan Shikhara. Gavakshas (horse shoe arch) ventilator openings in the north Indian architectural style are present in the niches in the outer walls of the temple. 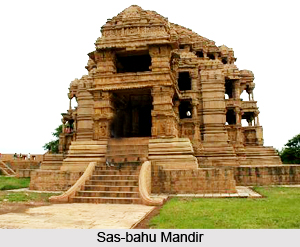 Another major monument present in the fort premises is Saas-Bahu ka Mandir. Located to the east side of the fort, the temple was built by King Mahipala of the Kachchhapaghata (Kachchhwaha) dynasty in 1092. As per folklores, it is believed that the wife of Kachchhapaghata's king was the devotee of Lord Vishnu and thus this temple was named as Sahastrabahu Temple depicting the Lord Vishnu with a thousand hands. While her daughter -in-law was devotee of Lord Shiva. Hence, another temple, dedicated to the Lord Shiva was also built beside the Vishnu temple. And then these two temples were jointly named 'Saas-Bahu Temple'. Both temples are built of red sandstone with several stories of beams and pillars without arches. There are three entrances in the temple from three different directions. Beautiful example of classic architecture, this temple is completely covered with carvings. Out of these carvings, idols of Brahma, Vishnu and Saraswati carved above its entrance door are mainly fascinating.

The Karn Mahal, located in Gwalior fort was built by Kirti Singh, the second king of the Tomar dynasty. He was also known as Karn Singh. Hence, the palace was named after him and became popular as ‘Karn Mahal’. This palace is also one of the significant monuments present in Gwalior fort complex.

The Garuda monument, dedicated to the Lord Vishnu is the highest monument in the Gwalior fort, located close to the Teli ka Mandir. Its architecture is a perfect blend of Muslim and Indian both architectural styles.

Chhatri of Bhim Singh Rana is also present in the Gwalior fort complex. This chhatri (cupola or domed shaped pavilion) was built as a memorial to Bhim Singh Rana (1707-1756), a ruler of the Gohad state. It was built by his successor, Chhatra Singh, near the Bhimtal which was built by Bhim Singh in 1754 as a monument at the fort. In honor of Bhim Singh Rana, the Jat Samaj Kalyan Council (parishad) of Gwalior organizes a fair on Rama Navami annually.

Apart from these monuments several other are also present inside the fort complex. There is Scindia School also located in the fort premises. Scindia School was founded by Madho Rao Scindia in 1897, exclusively for the sons of Indian princes and nobles.