Gwalior is located 197 meters above Sea level and falls in the Bundelkhand area of Madhya Pradesh. The City is located on Latitude 26.22°N and Latitude 78.28°E and fall in the northern sections of Madhya Pradesh. While the area of Gwalior district is spread across 5,214 km²,the Metro City of Gwalior covers 362 km² and falls under the Chambal River Valley. Gwalior is a land locked city with a population of about 1.2 million people.

The geography of Gwalior is closely linked to the climate experienced in the region where by there are both hot and cold extreme climatic conditions experienced in the city. Summer temperatures sway well above 40°c while winter temperatures fall to single digits thus resulting in the unique geography of region. The city has a humid subtropical climate. The highest recorded temperature was 48 °C and the lowest was -1 °C.The harsh climatic conditions and unique location of Gwalior has resulted in a risk abundance of several minerals in the region.

This is a modern decorative stone used by many contractors. Abundance of Rock Phosphate estimated to be around 35 million tons can be found in and around Gwalior.

Granite is mineral found in abundance across most Indian states and districts and this includes Gwalior as well. Granite is used for the productions of gravel which is used for constructions of buildings and roads. The mineral is mines in form of rock and crushed in to gradable sizes to use in constructions industry.

Marble is another important construction material found in Gwalior and its environs. The materials are mined in large sections and slips in to flat sheets which are used for flooring in most modern buildings today. Gwalior marble comes in unique colours and designs which are unique to the region and exported to many parts of the country. The marble is distinct for its unique colours ranging from cream, pink, red and white marble.

Slate is another construction mineral used for flooring and closely resembles marble but made up of softer texture. Slate also carried a distinct glittering appearance which delivering a very different look from that of marble. Gwalior slate is red and pink and mainly used on exterior walls due to its soft nature which results in it warring faster when used on floors.

Pyrophyllite is made up of aluminium silicate hydroxide and also known as Al2Si4O10(OH)2. The mineral form as a semi hard translucent stone found in different sizes, the mineral is distinct for its unique glittering appurtenance thus making it a perfect stone fore carving and sculpture.

Silica sand is found in Gwalior and deposits estimated to be around 4400 tonnes which is around 0.2% of the national deposits of the minerals. It’s found in form of sand and rocks in some regions and mineral is mainly used for making glass.

Quartz in the second most abundant mineral found on earth and it’s also found in Gwalior. The mineral is semi-precious and mostly used for making ornament where by the stone is cut and used for different ornamental and healing purposes.

Fire clay may seem to be common but Gwalior has a special verity found only in the region. Estimates put the quality to around 94 million tones and in commonly used for production of construction brick and pottery. The variety found Gwalior is unique to region and in high demand for certain pottery projects thus making it highly demanded in the region. 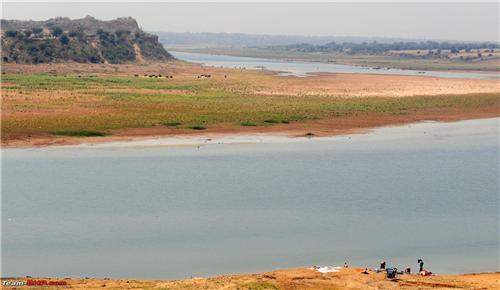 Gwalior is criss-crossed by several rivers which help irrigate the district as a whole. The notable river in Gwalior is the Chambal River. The river flows through the district as city thus being an important source of water for residence. In addition to the Chambal there is other like Swarnerekha River which also flows across the district thus helping irrigate many farms and the Gwalior city. Besides the rivers Gwalior also has some major water reservoirs like the Pagara, Tighara, Katwal water reservoirs which help collect water which is used during the dry season. In addition to three major reservoirs there are many other smaller ones located in different villages and used for irrigation.Gwalior is rich in natural beauty and landscapes which see visitors from across the country coming to experience. Many of the flora and fauna found in Gwalior and unique to the region thus attracting hundreds of nature lovers to see the natural wonders Gwalior has to offer.

Gwalior also produces small amounts of Gold and diamond but not significant deposits have been found in the region. The metals are mainly mined through panning as few people continue to mine the materials due to scarcity.Besides minerals Gwalior is also famous for several unique forest products from the region. The forests do not only product construction materials but also a wide verity of other food staffs and herbal medicines.

Gwalior produces small amounts of timber harvested form forest from fallen trees. In addition to timber several companies are harvesting palms and other plants which are used to produce domestic use items such as brooms and rope. Figures plants are used make strong rope used in the construction industry.
There is also a booming business of collecting herbal plants used to make medicine form the forests. With the threat of over exploitation the forest officers and administration is training Gwalior farmers to cultivate the herbal plants on their farms thus reducing the pressure on the natural forests of the region.The forest also produces a substantial amount of wild honey which harvested one a year by local honey hunters. The Gwalior forests are a unique geographical feature which is used by many of the local residence to generate income, the forests also product several wild fruits, berries and nuts which are sold in markets across the country.